What To Do With Oak Brook HQ 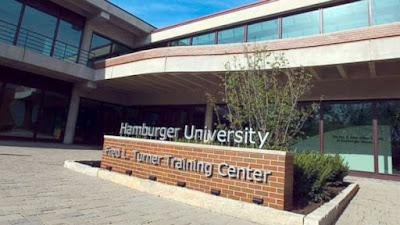 Crain's allows five or ten visits from your browser until the cookies kick in and the paywall goes up. Unless you're a subscriber, then there's no limit.

“Ian Calderon wants restaurateurs to think long and hard before giving you a straw. Calderon, the Democratic majority leader in California’s lower house, has introduced a bill to stop sit-down restaurants from offering customers straws with their beverages unless they specifically request one. Under Calderon’s law, a waiter who serves a drink with an unrequested straw in it would face up to 6 months in jail and a fine of up to $1,000.

“We need to create awareness around the issue of one-time use plastic straws and its detrimental effects on our landfills, waterways, and oceans,” Calderon explained in a press release.

This isn’t just Calderon’s crusade. The California cities of San Luis Obispo and Davis both passed straws-on-request laws last year, and Manhattan Beach maintains a prohibition on all disposable plastics. And up in Seattle, food service businesses won’t be allowed to offer plastic straws or utensils as of July.
The Los Angeles Times has gotten behind the movement, endorsing straws-on-request policies in an editorial that also warned that “repetitive sucking may cause or exacerbate wrinkles on the lips or around the mouth.” Celebrity astronomer Neil DeGrasse Tyson (always up for a little chiding) and Entourage star Adrian Grenier have appeared in videos where an octopus slaps them in the face for using a plastic straw.

The actual number of straws being used is unclear. Calderon, along with news outlets writing about this issue—from CNN to the San Francisco Chronicle—unfailingly state that Americans use 500 million plastic straws a day, many of them ending up in waterways and oceans. The 500 million figure is often attributed to the National Park Service; it in turn got it from the recycling company Eco-Cycle.

Eco-Cycle is unable to provide any data to back up this number, telling Reason that it was relying on the research of one Milo Cress. Cress—whose Be Straw Free Campaign is hosted on Eco-Cycle’s website—tells Reason that he arrived at the 500 million straws a day figure from phone surveys he conducted of straw manufacturers in 2011, when he was just 9 years old.

Cress, who is now 16, says that the National Restaurant Association has endorsed his estimates in private correspondence. This may well be true, but the only references to the 500 million figure on the association’s website again points back to the work done by Cress.

…In any case, criminalizing unsolicited straws seems like a rather heavy-handed approach to the problem, especially since we don’t actually know how big a problem it is. But don’t take my word for that. Ask Milo Cress. “If people are forced not to use straws, then they won’t necessarily see that it’s for the environment,” he tells Reason.” They’ll just think it’s just another inconvenience imposed on them by government.”

The "Be Straw Free" campaign sucks!!

No straws maybe I'll make more money on my $1 drinks love it! .05 for the starw sir.