What is a Pajama Boy?

In 2013 the Obama administration launched a website to encourage millennials to sign up
for Obamacare. Their website featured a picture of a young man who was apparently the model of the new American male (as defined by liberals). The internet went crazy and
many modifications to the photo were circulated.

We offer the original pajama boy here but your search will yield some clever changes. 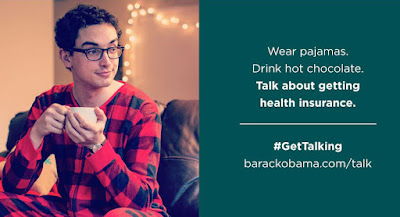 Before you vote for any Liberal...….

The two nights of Democrat debates which begin this evening, here is some of the weird stuff we're likely to see and hear. With apologies to the great P.T. Barnum, no one has ever convened such a "congress of oddities" before. In total, we'll hear from twenty candidates on Wednesday and Thursday, each of whom will be trying to put their personal spin on topics like the imminent end of the world from climate change, reparations for slavery and homosexuality, the end of income inequality, free socialized everything, wide open borders, restriction (or repeal) of 1st and 2nd Amendment rights, forgiveness of college loans, a $15 minimum wage,and no-questions-asked legalized abortion up until the time the fetus is old enough to personally file an amicus brief in court.

Lacking any ideas of substance, all of the candidates are hoping to bribe voters with budget-busting giveaways, with Bernie Sanders currently leading the pack with his $2.2 trillion plan to forgive college debt and make college not only free, but an actual right.

Other initiatives include;
1) 100% free healthcare including liposuction, Viagra,gender reassignment, and breast implants.
2) College degrees will be issued without the requirement of attending college.
3) All existing debts will be cancelled; nobody owes anything to anybody.
4) Unemployment benefits will be permanent and twice the minimum wage of $15.00
5) All cars will get 100 miles per gallon and their exhaust will be pure oxygen with a "fresh pine" scent.
6) Everything served in a restaurant will always be on a 99¢ value menu.
7) Fitness guidelines will be revised so that every American meets the federal definition of "fit."
8) 50 bonus points will be added to the IQ score of every American.
9) There will be no more taxes of any kind except on the Evil Rich.
10) Our borders will be totally open and all immigrants will get immediate lavish benefits

And ONLY the RICH will have to pay for it!

ALL of this is strongly endorsed by the pajama boys, Clueless Chris and Stock Price Steve.

I do like the idea of just issuing college diplomas to everybody. It takes away the need to raise money for tuition and eliminates $400',000 per year "jobs" like Liz Warren's for teaching a single class. It just eliminates the entire debate.

If you want to hire someone with an actual degree, ask for a trasncript. Tell the knuckleheads with useless things like gender studies degrees that they got their free diploma so be quiet and be happy. Start you PR own "company" and pay yourself a "living wage". After all, you're equal now.