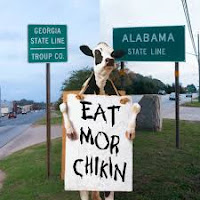 McDonald's franchisees aim to compete with Chick-fil-A
.
Posted by Richard Adams at 7/10/2019

Secure your equity- JOIN the NOA

Can you help me put this in perspective? MCD tried this and it failed!

Why will this product work now or what has changed to try this again?

The Sandwich was a strong competitor, until a chef started playing with recipe and would could not find a place on the calendar to market it. Same as so many other Ideas we have had like flatbread or Bagels. If you can tell folks on an ongoing basis with our big Menu folks forget.

The email sent out by the new incoming OPNAD chair is disturbing. Seems as if she has already conceded much to corp, and she has drank the Kool-Aid. It was very biased AGAINST the NOA.
SELLOUT!!

No doubt in MY mind that entire email was written by corporate and Vicki was forced to send it around. Its MCD corporate striking back at NOA for having some original thoughts.

But lets not blame Vicki. This puts her in a tough spot before she even has the job. Classic MCD Corp bullying tactics.

IF as stated above, the email was written by corp, and she signed it and sent it out, then she is the WRONG person for the job!

Shades of the squeamish NLC

Speaking of OPNAD- WHY don't they(MCD)ever tell us the vote representative by representative? IF we knew how our OPNAD rep voted, we could at least question them about it,or vote them out during the next election. And how can we really trust MCDs OPNAD head count? Reminds me of an old adage- "Figures Lie and Liars Figure"

Another question - Should there even be an OPNAD? OPNAD is a relic from the last century. Launched in 1966 OPNAD predates Americans walking on the moon by three years. Most McDonald's USA Operators had not been born.

Is OPNAD the most efficient way to spend precious advertising funds in this modern age?

Is OPNAD just a way for McDonald's Corp. to control Operator advertising?
.

Is OPNAD just a way for McDonald's Corp. to control Operator advertising?

Control Advertising was a start... fixing prices is the current state, under the false flag of advertising.

Never seen a OPNAD VOTE, nor do you ever see a FIELD VOTE tally. Everyone says the vote NO.. next day, you get the email IT PASSED!

A system where the corpkration is forced by shareholders to relinquish stores to its inability to run stores, os allowed to consolidate controls that gives them the same power of mismanagement.

NOA should press MCD Corp to partner with a 3rd party accounting firm to handle all voting and results for full transparency.