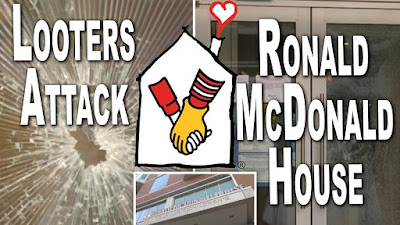 We must stop the liberal marxists from destroying our country. BLM, Antifa, and similar groups aligned with the Democratic Party need to be destroyed.

Seems MCD didnt get their monies worth in their BLM payoff of funds.

But it was peaceful

If you think these folks are supporters of Joe Biden and the Democrats idk what to tell you. Biden isn’t some radical socialist and if you believe he is you’re too stupid to be in business. These folks hate him and his centrist politics.

Thank you, it's good to hear the liberal viewpoint from a corporate employee.

Biden is not a centrist, never was. He's not anything but a husk being pushed around by his wife and a bunch of leftists. The real power in that party is the squad, AOC, Bernie Sanders, ANTIFA, BLM, etc.

Conservatives describe Biden as a "vessel" for the leftists who will call the shots. I agree with those who describe him as a Trojan Horse filled with socialist soldiers.

If he were to be elected POTUS the above players will run the White House. They'll prop up Joe for public events and then wheel him back to the residence where he can watch reruns of Matlock while they get to work destroying the country.
.