Free Food - What an Original Concept!

Who'd a thunck of it? 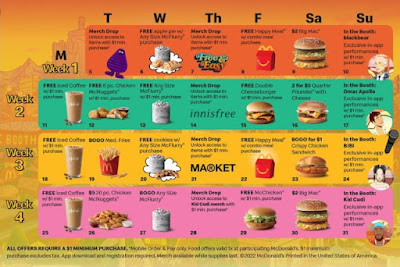 
The promo and discount coupons are off the charts.

Its all MCD marketing people know how to do. They learn it in grade school.

When you are out of real ideas…


Is the ultimate objective to get the promo/discount coupon items above 5 percent?


This is what occurs when you allow an empowered group of Owner/Operators to decide GMA activities. They do as the non-operational fools in MHQ tell them is good for the business. Then when it is over, we will receive fabricated data telling us that this was the most wonderful program ever. NFLA, NOA will you please start defending the Owner Operator Community. You were funded and are getting funded. Please hire serious-minded lawyers and preserve our brand. Interesting as the 3-legged stool process has one leg of the stool jamming it up the posterior of the other two legs. Share Holders beware the rise of dissention is coming.

Vote no confidence in McDonald's leadership and let's get Blake Casper for CEO! a problem fixed and solution offered.

I think it would be pretty easy, especially if there would be an investigation into the Easterbrook termination. When did the BOD know something was up? For how long? and what did they do about it. I think, from knowledge of the situation, the BOD would likely have to resign. Step 1. And then business news would start covering it. and seeing a vote of no confidence come out prior to the BOD Scandal would likely get all leadership removed.

we do not need an investigation or any one outside. we need only to talk to wall st analysts and tell our story. they will cal Blake directly

I disagree to the comment above. That we just need to talk to analysts…

A vote of no confidence and a push for BOD to be investigated go hand and hand. Zero accountability on the BOD. So many things they did wrong. Even if Blake doesn’t want the job, this is the right approach. And will show great negligence on McDonald’s BOD and executive leadership.

I’m sick of letting McDonald’s dictate the narrative. Time to shine a light on these poor leaders and let the outside world make its decision.

Kevin & Joe are meeting with GOD & borrowing lots of money

BLAKE is leaving soon & will get a well deserved wind fall

HOPE you are still with us in spirit

Public announcement of Blake’s forced sale was made today.

McDonald’s is abusive and a bully. Just wait until Blake has the opportunity to share his side. More than likely, McDonald’s will wrap Blake up in a going away NDA blanket full of threats that prove how abusive McDonald’s can be.

McDonald’s has broken the sacred veil of trust established between Ray Kroc and Blake’s grandfather - Fritz Casper. Shame on McDonald’s and their local Florida henchman - Joe.Chiczewski. Joe has more complaints about his abusive treatment of McDonald’s Licensees than any former/current McDonald’s employee. McDonald’s - please get Joe Chiczewski under control! His frequent outbursts, profanity laced tirades and acts of retribution need to end.

.I am interested in your or other fellow Owners reaction to today's surprising announcement that Blake is selling his nearly 100 restaurants to the Corporation? At first my thought was of gratitude to Blake and others for their courage to start and manage NOA as the group that could come to the support of NFLA, who is stuck working with a dictatorial management team that candidly they have admitted for the past two years could care less about their point of view. First we had the famous PAUSE because of the December 2020 (after 2021 planning was done) surprise announcements further gutting financial partnership with Owners. Then they tell us in November, call two meetings (Atlanta and las vegas) of Owners in what all thought would create a plan of action to fight the continued cost shifting and heavy handidness in nearly every decision/plan. The NFLA told us they were blind to many of the elements, the delivery Suko puzzle of tainted changes, and worse a grading plan so ill-timed and punitive not only are Owners running to the exit but now our best restaurant managers, mid-mgr's and supervisors leaving it is so ridiculous. Your blog, and the rumor mill of active NOA dues paying members, is full or speculation about where have our leaders been during this time, and that NOA and NFLA have been neutered. How can they be advocates during the long time it must take to negotiate such a bid deal? Did the NOA Board know, and step in to try and represent us? I cannot recall the last proactive initiative of NOA that tries to recruit us for $$ by saying they will defend NFLA. Where is the plan of advocacy on the worse assault on Owner equity since BBV was forced on us by a new, non-restaurant-oriented team that remains today in the C-Suites and on our Board. What is our position on the 2022 plan NFLA called a lie of collaboration. Why does Larry and NBMOA have to step in to take the place of what NOA should be doing by calling for a vote of no-confdence of Steve Easterbrook 2.0, Chris K? they have been hell bent on reducing our voices, readjusting all new costs to our p&L, and we hear crickets at the most severe time? I hope Blake's farewell to his fellow owners who were both grateful but more importantly trusted him to shepherd us as we were so frequently abused, will include NOA adding its too long silenced voice by adding the NOA Survey results I was so happy to see, thinking they were finally reengaging that we ALL know will have a similar overwhelming vote of no confidence on Erlinger, just as the NBMOA's did on the archetct of the anti-Owner equity assault.