Occasionally a visitor to this website mentions or asks about the history of the first
McDonald's Operator Association (MOA). Several people have asked me for some feedback
on the topic.

Frankly, MOA was before my time in that I was a shave-tail McOpCo guy in those days in a predominantly McOpCo market.

I didn't know much about the franchised side of the business until I moved into field service.
By then MOA had dissolved and the NOAB had been formed.

I do remember the regional managers being very nervous about MOA. But, two of my first instructions as a field consultant were, a) Don't talk to the Operators about MOA. b) Don't treat the Operators who were in MOA any differently.

But, I can make a reading recommendation. Even though it was originally published more
than 30 years ago "Behind the Arches" by John Love is still the definitive work on the history of McDonald's.

Love begins with six words, "This is not a corporate book".

I can bear witness to that statement. He did most of his research on the book when I was
still a corporate franchise guy. I worked out of the San Diego regional office and John spent
a lot of time in that office attempting to get some of Ray Kroc's time. While he was waiting
he had complete access to corporate employees with no supervision from Oak Brook.

I'd find him chatting casually with corporate employees at all levels. He was often in the
break room having coffee with a couple of corporate staffers. This is not a corporate book.

While he doesn't devote an entire chapter to MOA he covers that part of McDonald's history pretty well.

Anyone who has made McDonald's their career or a path to business ownership should read "McDonald's, Behind the Arches". 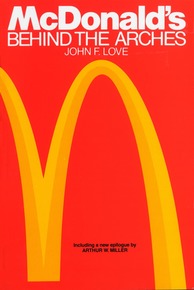 I'm sure there are used hardcovers out there but the softcover (new and near new) appears to widely available online.

I have both and the two versions are identical. Except - the 1995 reprint has a 21-page epilogue at the end that was written by a different writer. I've always been suspicious that the writing of the epilogue had a heavy Oak Brook influence but the original book by John Love is intact in both printings.
.

Make an exodus plan quickly if you are a small McDonald’s franchisee. They are undervaluing stores any way that they can.

I will tell you a story I heard yesterday but I don't know if it is true. I was told that MCD refused to approve a sale between two operators. The reason MCD gave was that the selling price was too high and they were not going to exercise their right of first refusal. They went on to say that the buyer could not cash flow at that selling price and they encouraged the seller to lower his price. After a few months the seller agreed to lower his price to insure the buyer could cash flow. The buyer submitted a contract for the lower price and then MCD exercised their right of first refusal and purchased the store. If true, and I don't know that it is, we are in a different ball game.

In the past if MCD was concerned about the buyer paying too much they would approve the sale subject to the buyer taking a larger equity position with non-encumbered cash.