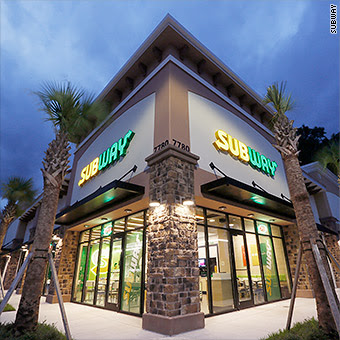 surprised they didn't sell out sooner, In-N-Out will probably sell out one day too.

In-N-Out will sell out one day in the sense they'll go public. McDonald's Owner/Operators in the western USA have been wishing this would happen for decades. When that happens Wall Street will start running the company and will insist on breakfast, extended hours, a more complex menu, etc. That will take some sheen off the brand.
This was expected to happen when Lynsi Snyder inherited the company but that was in 2010 and since then they've just kept chugging along. She seems to enjoy being a billionaire. She was only 28 when she inherited the company so everyone expected the worst. Now, at 40, she could be running the company for another 20-30 years.
As they expand east they'd be smart to do some kind of franchising. Since they don't need the franchisee's money they could go with the Chick-fil-A model. They must have a few thousand long-term employees who would love to be on-premise Operators.
.

Subway killed its own businesss by over expansion. Franchisees bought a job, then a job was sold to another Subway franchisee across the street, cutting the pay in half.

Self-inflicted wounds. The development agent model is poison. It prevented them from having large, multi unit franchisees developing their own territory well so as to cover the area enough to meet competition without cannabalizing their own sales. Development agents don't care what happens to a market after they sell as many franchises as they can, to whoever, wherever.