America's On The Move

Texas and Florida largest gaining states in terms of population 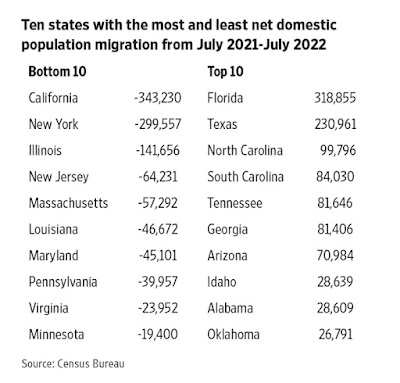 That's right. While the party of a state's Governor doesn't describe the state's entire political leanings it's a strong indicator.

Of the ten states that gained population nine (9) of their Governors are Republicans.

Of the ten states that lost population seven (7) of their Governors are Democrats.

The outlier would be Republican Glenn Youngkin of Virginia who replaced a Democrat governor but only a few months before the Census Bureau completed these estimates. So the list of losing states is really 8/2.
.