Sounds an awful lot like an attempt at intentionally intimidating dissenting voices.  “Rewrite” at Mcdonald's has always been discretionary and there have always been, and always will be, disagreements as to whether the discretion is or was improperly abused in any given case.  So, the company is not changing the contractual framework, but rather, it has announced it will “raise the bar” under the existing contractual framework.  Why? And why now?  Is the company admitting that it has made bad rewrite decisions leading to a proliferation of poorly run restaurants it now regrets?  Not likely.  Or is the company trying to stifle dissent by franchisees to the company’s direction in recent years?  Far more likely.  Kudos to the NBMOA for its courage in voting “no confidence” in the current regime. 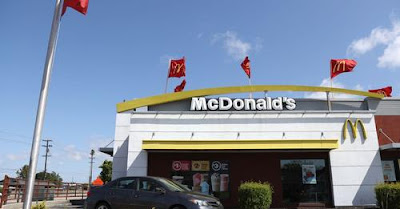 Face it- until owners grow a pair and participate in some "civil disobedience" that affects the Stock price, nothing will change and we will continue to be abused!


And what exactly is this camp McDonald’s nonsense that basically gives away free food during the entire month of July for absolutely no reason? The offers are absurd.