What is Burger King Thinking? 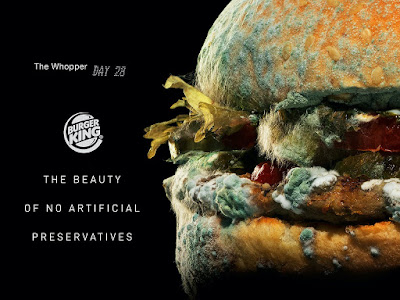 What a terrible idea. one can only hope that our new ad agency is smarter than that... Seeing I have zero input however contribute 2% to OPNAD...


“‘Brand Twitter’ has been having a field day on social media” following the launch of Burger King’s new Moldy Whopper commercial, Ad Age writes. The campaign marks the brand’s departure from using artificial preservatives in a “bold, eye-catching, and unexpected” ad that may not translate to an increase in sales, as Forbes notes. “People might remember nothing but a rotting burger,” contributor Avi Dan writes, a distinct disadvantage for a food company. Ad Age adds that an early opinion survey from CivicScience found that more than half of respondents were still “not at all likely” to eat at the chain. However, as Ad Age and Mashable note, the ad is sparking conversation, with brands like BurgerFi and Aviation Gin already responding with parody videos of their own.

How potentially brand destructive is that ad. I agree, how easy for OPNAD to develop such a tactic with no recourse from the field.

BK doesn't care if it sells burgers at its restaurants. The management doesn't own hardly any. The ad execs at RBI corporate are going to win CLEO advertising awards from their woke progressive industry peers and get bonuses.

Does this sound familiar? It's why we will be forced to sell fake meat "burgers."