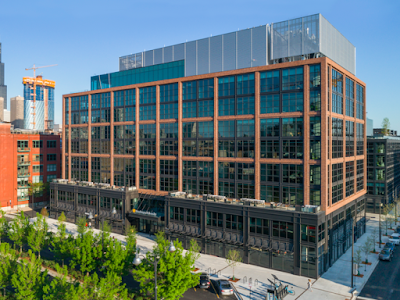 You cant make it up anymore...

New owner will jack up the rent and operators will have to pay more fees for this Taj mahal.

Easterbrook and Crooked Chris K must have gotten huge kickbacks to lease space rather than buy.

That might be, but the reason they are leasing is that they have other uses for their cash and/or more debt. Those assets have to be returned to shareholders. Buying would have tied up that cash. Borrowing to buy the land and build the building would have increased debt on their balance sheet and limited their ability to borrow money to repurchase MCD shares.

I was surprised at the term of the lease. It expires in 2033 which makes it a 15-year lease. They were in Oak Brook for 50 years! There could be options on the back end but 15 years flys by pretty quickly.

Having said all that - maybe the developer didn't want to sell and would only lease. Now that the development work is done and the property is leased to one of the most important brands in the world I'm sure the sale was very, very profitable for the developer.
.

...or will be when they find a buyer.

I don't get this company. I visited the downtown Chicago restaurant recently (formally rock n roll) it was cold/cafeteria like and overall stale in my opinion. These modern and progressive executives have singlehandly destroyed our beloved company in about 3 years.

Then they take on debt to do share buybacks while operators go deeper in debt to modernize restaurants... Those share buybacks have not helped influence our customer's experience. In fact, I would argue it's done the opposite. It's forced us to max out our Credit and now we have to put constraints on the restaurant to ensure we pay the bank back....

This company is out of touch. I would love, for example, someone from McDonald's to come into my restaurant and show me how to train someone with an iPad and Fred.... I doubt they have a clue. Which is interesting because that's -as operators - what we buy into... A system which includes good training tools and resources.

That's the company's issues. Operators have also fueled this problem with our own greed.... To help promote the company line in hopes of getting rewarded with more restaurants... Our previous leadership teams should be hazed and held accountable. they give good speeches but they have not represented the entire operator community. only themselves.

full circle, not owning the downtown building is another poor decision. Hopefully the landlord will treat mcd corp the way they treat us. And hold the lease rewrite over its head and makes them jump through hoops.

"
full circle, not owning the downtown building is another poor decision. Hopefully the landlord will treat mcd corp the way they treat us. And hold the lease rewrite over its head and makes them jump through hoops.

I will reply to this comment with the same one I saw in another thread: No matter how the franchisor incurs the cost, the truest thing in franchising is that the franchisee ALWAYS ultimately gets the bill. " (paraphrasing.Not the other;s exact words but same meaning)

It's all short term thinking, including the new home office lease. None of the key decision-makers will be involved with McDonald's five years from now. Long term thinking is solely in the aspirations of Owner/Operators.
.

I understand that McDonald’s pays for nothing. However, to Richard’s point, it’s short term thinking and — as Chris K would say — an efficiency problem. Owning the property would be better than pissing away lease money. I also really do hope the landlord treats MCD like crap around rewrite time.... they simply deserve it.

unfortunately, when their rent goes up - somewhere, yours does too. Ever wonder why TECHNOLOGY is now a Profit Center for them?

We went from a few hundred 10 years ago, to more than $25K per restaurant / annually.

Dominoes Pizza you can order by texting an EMOJI.

Burger King can send a coupon when you drive onto a McDonald's parking lot.

Its all about cash flow! Leasing allows for full and immediate expensing of the lease payments, whereas owning the building requires capitalizing much of the cost and depreciating it over 39 1/2 years (after doing cost segregation studies, Section 179 expensing, some bonus depreciation and, if Congress ever fixes the tax reform typo, QIP bonus depreciation).

Not much cash lying around for stock buybacks and management bonuses if it takes 39 1/2 years to get the cash! None of these people will be here in 3 1/2 years.