Complete MRP - Then Bulldoze It 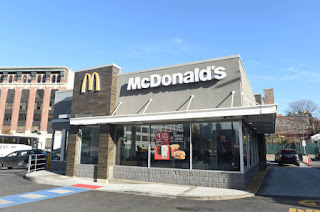 WHY in the world would MCD allow a building to be MRP'd without checking real estate tenure? That poor Operator just wasted hundreds of thousands.

Typical of MCD Real Estate and Construction today. They dont have a clue... bad rentals, poor plans, massive cost overruns. Whos left holding the bag, the operator. Who can the operator turn too? No one, really.

Clearly, over recent years MCD Real Estate and construction has lost so much credibility and expertise. Several years ago in this market they were missing their own sales projections by $500,000.00 on new stores. While at the same time new sites were impacting existing stores by 20% and the new stores were awarded to minorities. This was not a one off exception it was fairly common. When you would talk to them about it they were just at a loss to explain it. Conclusion was that many were just incompetent. Its true. The new contractors used by Chris K's crowd were qualified GC's but not with MCD. Building materials were inferior to those we were accustomed to, workmanship was inferior and all of this has built in high future m&R costs. The region agree's this will be a problem. We had our "operator review" done in our most recently completed MRP stores. You could notice the regional people looking up at ceiling tiles that were not flush and the same for other joints in the store. I would volunteer that I had nothing to do with it and didn't even know the contractor. One on one they would agree with us but not as a region. At a co-op meeting I asked if they had changed the algorithms used in their site selection formula's. no one knew what I was talking about. The reason I asked was because I had just spent $5.3 million dollars on two relocation's that both missed their sales projections by wide margins. It is unbelievable!!

Missing sales projections by wide marginal? explaining that is EASY!

When you need to borrow million$ of dollars, banks require projections from a "trusted source" and they trust MCD. So MCD gives the banks the numbers that justify the high amount of debt into which you will be putting yourself to build out MCD's real estate.

Why should MCD care? It's all free money in fees and rent. If you go under, they line up the next operator to step in as their tenant and keep squeezing that lemon, all for free.

It's pretty simple. Regulators have aggressively given the whole scheme a vigorous ignoring. Don't look for help from the government.