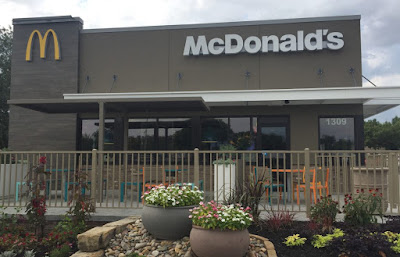 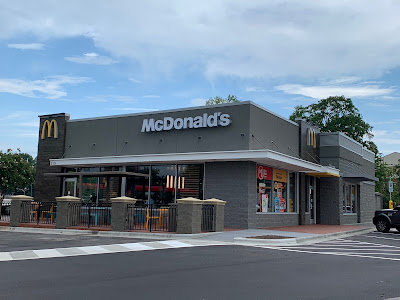 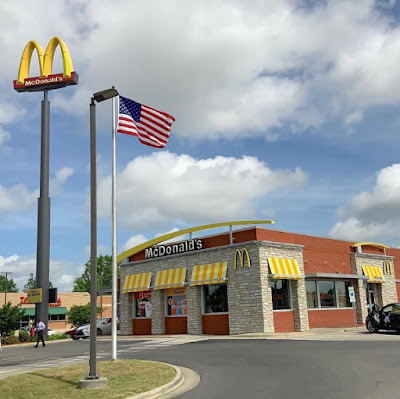 The McDonald's brothers and Ray Kroc apparently agreed that it's important to erect a building that would pull drivers off the thoroughfare and into the restaurant parking lot.

While I've never been a fan of the shoe-box McDonald's store architecture I understand that the McDonald's building must evolve. But they don't have to become butt-ugly. The first two pictures above are stores that just completed an MRP. At first glance it looks like the same store but look more closely. One is in the Midwest and one is on the east coast. The third picture is the shoe-box design from a decade ago.

Imagine, you're a parent with kids in the car - would you rather visit the third store pictured for some Food, Folks, and Fun or would you visit the new design that has all the warmth of a Federal Penitentiary.
.
Posted by Richard Adams at 8/21/2019

You have captured my sentiments exactly.
We are no longer Food, Folks and Fun. We have the Prison look, on the outside of the building and our crew uniforms, Grey and Blah. Gone are our Iconic Red & Yellow colors that signified life and energy. Gone is our Brand Ambassador (Ronald) that was all about Food, Folks and Fun.

Now we have a Shoebox look, with Cold iron metal colors, Uniforms that remind me of Federal Prison work clothes, No Identity and No Worldwide Recognizable Corporate Icon.

We have become Stodgy, Old and Lifeless, not by our age of almost 65 years, but by trying to be Modern and Progressive.

The Ivory Tower Guys are patting themselves on the Back for the changes in Sales, New look and Stock Price. The Real Truths are Sales is about Price increase, the New Look in not inviting and the Stock Price is overly inflated. We are a dying brand in the USA. One only has to review the eroding Guest Counts over the last 6 to 7 years. We are no longer growing Same Store Transactions or New restaurants, so No New Store Transactional lift. Time will tell that I am Right.

The mansard roof with lighted room beams was a valuable trademark and asset. Everyone knew a MCD INSTANTLY by the unique roof.(you could even recognize Mcd from an airplane!) Now, cookie cutter ho hum architecture looks no different than everyone else. Strategic Blunder!!

But look on the bright side, these prison-look remodels/rebuilds are MUCh more expensive!

When your leadership has no history of McDonalds.. the system is at the mercy of their expereince. Which is typically more of our failing competition.

Sadly, even operator experince is deemed invaluable, with successful expereince being deemed outdated and invaluable. With a strategy of 'new blood', that has no experience or lotalty to the brand. As it breaks (TC declins), no one can fix.. for they never truely understood the mechanics.

No worries that the prison look builds are so expensive, it's our money that gets wasted. Stock Price Steve and Clueless Chros still own the real estate, no matter what happens to our wasted money.