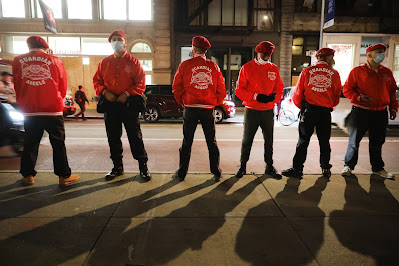 You might know that the leading Republican candidate in the race is Curtis Sliwa, the founder of community safety group, the Guardian Angels.

But did you know that the Guardian Angels have their roots in an NYC McDonald's?

And that former McDonald's Owner/Operator Don Chin was one of the original ringleaders?

HOPING CURTIS WINS BUT VOTES ALREADY STACKED AGAINST HIM

Your & others thoughts PLZ

Clearly, the advantages of McDonald's Quality, Service and Cleanliness (QSC) and the ability to meet that standard more consistently. Rested in the Franchising that the focused on local markets and entrepreneurs; allowed the "We are not just on your corner, but in your corner" operations.

Even the current franchise agreement reflects that "ancient" sentiment; stating that franchising occurs only with operators that LIVE in their local market. So how does owning 20-40 stores, scattered across a wide plain of operational space equate to the past success McDonald's enjoyed with the local operator? Simply put, it doesn't.

Improving the McDonald's system, by copying and duplicating the failed systems of our competitors cannot be a long-term strategy for success. Unfortunately, as its been pointed out on several different occasions. Neither the Corporate's Leadership or Franchisee Leadership contains a sufficient braintrust of McDonald's brand commitment and history. In many cases, there's major swaths of GEN+ operators that actually never understood the independent franchise model.

The days of COOP planning, with actual market and competitor analysis, are simply gone. COOPS are simply a means of adding percentage payments on top of OPNAD specific charges - and an excuse to push further discounting to drive a stock price. Brand reputation be damned.

So stop fighting, and milk it for all its worth - as that worth is evaporating. There's no more partnering for success, three legged stool. There's simply the hand out, and that hand has but a single finger on it for the true operator. One things for certain, when traveling - I never seen so many run down locations; filthy cleanliness - but all in LEO patches with those 20-50 stores. Seems it didn't take long to become like a BURGER KING operator after all.