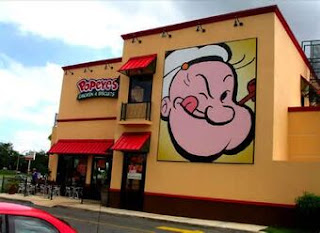 Amateur move: If you're going to base a campaign on a domain name - protect it!

Creative domain names are inexpensive. When buying a domain name most vendors give you a list of options and variations on your initial choice. The smart thing to do is to buy them all and maybe come up with some of your own. At worst it could cost a few thousand dollars.
.

Maybe it was before my time or after my time but I don't know much about an animated Popeye the sailor. What did he have to do with Louisiana? Is their chicken fried in olive oil?
.

Have to ask where their legal advice is coming from? To post an admittance of sorts during the middle of a lawsuit battle claiming the same?

Have to ask yourself, is there a destructive nature to todays leaders in destroying the McDonald's brand?

Has the Board allowed the enemy under the wire?

Maybe they think they have to destroy the brand to save it.
.

Indeed it was a amateur move, because we are being led by an immature, clueless amateur as CEO.

Oddly, the only single obligation that MCD management has under the franchise agreement is to protect the intellectual property (logo, trademarks, branded websites, things like the name "Big Mac" etc) and they defaulted on it.

Every other obligation under the franchise agreement is the day of the owner/operator and we excellent at meeting them every day.

Who really should be running the brand? NOA, time to step up and take control.