Real Meat is Good For the Earth and for Humans 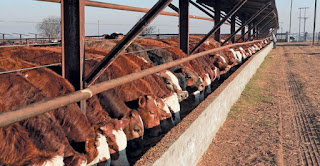 Meat is crucial for feeding the planet, and going vegan is not more green, say scientists

What we knew all along - when we focus on what our CORE VALUES are and not chasing after whims. There's a very fine line between LEADING EDGE and CUTTING EDGE - with a big difference in vulnerability and cost to the operator.

Its amazing to hear senior leadership (Corporate and Operators) talk about bring back SUGGESTIVE SELLING, like its some new deal - when it was only five years ago they made restaurants ABANDON suggestive selling with ASK, ASK, TELL.

Isn't it amazing how going back to simple McDonald's basics and menu simplification - is panning out to be the answer all along. Seems its Ray Kroc's McDonald's after all...

Isn't it sad how many in the system don't know those basic fundamentals.

Now if we can focus on how MADE FOR YOU destroyed the SPEEDY system - the entire plan may come together! We need to be FAST, not simply CHEAP.

Why on earth is no one talking about the Ops Officers from the DFO on leave and suing MCD?!?!?!

I think the lawsuit is based on discrimination issues. However, the real underlying issue is the way they were told to treat operators. Arguably unfairly and with an agenda... Targeting of sorts. And then they lost their job due to restructuring, after they treated people poorly, they themselves, were treated poorly and want to be compensated for it...... No one, though, seems to care about the operators that were targeted.... Good, honest operators, that gave their lives up to help this company grow. It's sad that someone would sell their soul for a promotion..... in a way, the lawsuit with the OPs officer should only blame themselves for going along with a twisted/targeted purging plan. Although, in my opinion, they will get a settlement offer and a sign a non disclosure agreement and life will move on.

Good question! It seems that the 3 people named in the lawsuit all demonstrated similar behavior. One of them already got what he deserved by being fired and publicly outed for his behavior. The other 2 “attack dogs” should be thrown out as well. They are both (Chris K and Charlie Strong) power hungry hatchet men. They obeyed Easterbrook’s direction, putting company people against operators. As well as putting company people against each other with no regard to any repercussions. I am proud of the 2 women that have come forward and I hope the prevail in their lawsuit as I believe they were treated in the way they are alleging.

My question has always been, with active lawsuits initiated by operators or others, the plaintiffs never supenoa the NFLA, OPNAD or NOA to depose the franchise owners with a simple questionaire.

Theres obvious RICO violations occuring, and easily susbstaniated... if done correctly. It takes but 1 Federal ADA to want to make a bame for themself.

Few, if any, McDonald's Owners would respond to such a questionnaire.
.

Rico violations can be equated to the Trump impeachment process.... Quid Pro Quo is how the world goes round. If you want to be apart of the system.... then you should listen to your FSM.... at least that was the old mentality. I'm thinking it has changed slightly with the introduction of the NOA. Although there are many ways to kick an operator out of the system. The real solution, in my opinion, would be to get federal laws supporting Franchising like in the great state of Wisconsin. You ever wonder why there are so few operators in Wisconsin with so many stores??? The other solution is to be a private company and that won't happen unless Warren Buffett decides to buy MCD.

"The real solution, in my opinion, would be to get federal laws supporting Franchising like in the great state of Wisconsin."
This is correct, but McDonalds operators are routinely propped up to testify against them in legislative hearings. Why ar these Benedict Arnolds agreeing to do this year after year when these laws are proposed??? They should be testifying FOR them, or staying away.

A supenoa to the operators could be ignored by operators, it would be doubtful. With todays shrinking numbers, its very easy for a court to track responses. And thanks to corporate mandated methods, easier to address with organizational memberships like COOP, OPNAD, NFLA and NOA.

You'd never get federal franchise protections, but it should be a mission of the NOA to assure state protection in all 50 states. Not sure what the NOA stands for today.

Private would be worse than public.. operators wouldnt have an option... and in most private companies wouldnt exist.

The feds do have other statutes. And I wonder how Corps written legal opinons with pricing, etc in the past, are used against their current practices today; would reflect against those statues?

To say its operator driven, under coercing circumstances... isnt a insulating protection. Im sure theres plenty a smart operator, past and present, with written and recorded evidence to make it interesting.

Personally, I dont think it should come to such tactics. But why is it always the operator on the losing end? Things change, I see this changing too. Again, the creation by corp, with making some organizations so large and powerful to fail.

What laws does Wisconsin have?

"You'd never get federal franchise protections, but it should be a mission of the NOA to assure state protection in all 50 states. Not sure what the NOA stands for today."

CFA routinely seeks both. It got a law passed in CA and almost got one in deep red Alabama last year. There are several other pending state bills and federal bills. It requires a tremendous amount of effort to get even one state bill passed. A fed hill, while tough, is at least a more focused singular effort and less spread out use of resources.

NOA could easily join in these efforts, bur seems to not care about legislative efforts. It seems focused on begging corporate for help. At least NOA criticizes corporate strategy. Someone has to stand up. It's just that it has to realize that MCD is simply not focused on our bottom lines and never will be. Soon it will own zero restaurants and will be even more of a fee and rent collection only operation. Focused on buybacks and debt and diffident a and their stock options being in the money. That is all completely legal, as is abuse of operators based on the franchise agreement.

When all of the problems in the McDonald's system are solved then Owner/Operators will have time to fool around with legislation.
.