The Founder - The Movie 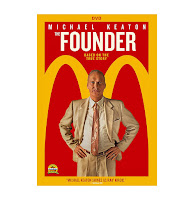 I've watched "The Founder" a couple of times and have to
say I enjoyed it, at least the first half.

I've heard or read the stories about Ray Kroc and the McDonald brothers a few thousand times so it was fun to see the story dramatized on film. Ray doesn't come across as a saint but as a normal, hard working salesman.

The second part of the movie is a desperate attempt to
make the movie interesting and is a mess. I don't know if I was around McDonald's when Ray met Joan. But, because I started in Minneapolis, I eventually knew all the folks portrayed in "The Founder". The writers pretty well messed up individual roles and much of the historical timing of those years.

So it's not historically accurate and it's certainly not a documentary. For those interested in McDonald's history, pick up a copy and watch it until the scenes with the screaming matches between Ray and the brothers. That's where the fantasy kicks in.

But is it an anti-McDonald's film like "Supersize Me"? Not at all. I think McDonald's veterans will enjoy the first part and will get a good chuckle out of the way they try to re-enact the kitchen operation.
.
Posted by Richard Adams at 5/16/2017

The first time I watched I was struck by the movie mockup of the first McDonald's store where the "root beer" barrels and orange bowl are about one-third or one-half the size of reality. When I watched again I remembered those two barrels and the orange bowl created a wall between the grill area and the service windows. While that worked great operationally, how do you shoot a movie with a six-foot wall in the middle of the kitchen. They fixed that, they shrunk the equipment so the actors were the biggest thing in the kitchen. Creative license.
.