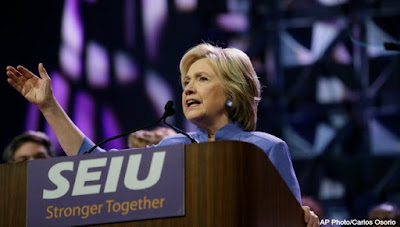 Let's remember, if the wrong person gets elected President the NLRB will implement Joint Employer regulations, franchising as we know it will be dead, and you will remember the good old days when the minimum wage was only $15/hr.

Then you'll have government bureaucrats and union thugs running your business. You're right, that's the end of franchising.

The National Labor Relations Board (NLRB) on Thursday handed down one of its biggest decisions of President Obama’s tenure, ruling that companies can be held responsible for labor violations committed by their contractors.

While the ruling from the independent agency specifically deals with the waste management firm Browning-Ferris, the so-called “joint employer” decision could have broad repercussions for the business world, particularly for franchise companies.

Opponents of the action warn the ruling could hurt businesses as diverse as restaurants, retailers, manufacturers and construction firms, as well as hotels, cleaning services and staffing agencies.

In so doing, the board’s Democratic majority reversed several decades of practice where companies had to exercise “direct and immediate” control over workers with a new regime in which regulators will examine each case for signs a company has the potential to affect pay and working conditions. It will have a large impact on how franchisers like McDonald’s do business, since they can potentially be held liable for hiring and firing decisions by any of their thousands of individual franchisees and even routine business decisions will be examined in light of how they affect union organizing efforts.

“If this goes into effect then the franchiser has to step in and have a standard for hiring, human resources, payroll, everything,” said Jania Bailey, a board member of the International Franchising Association and chief executive of FranNet, a consulting firm that matches franchisees and franchisors. “It basically nullifies this independent business model.”

Joint Employer was passed Thursday by the NLRB. The clock is ticking down on the end of franchising as we know it.

This is among the job/business killing regulations that the Republican nominee has sworn to review and end quickly, if elected. With six months to go, Obama and his administration is hard at work "fundamentally transforming" our economy, and country, into the progressive/socialist utopia that he promised eight years ago during his acceptance speech. This is a most dangerous time for our democracy, and for the business community.