Can Anyone Be Silly Enough to Think...

that the people who brought you this... 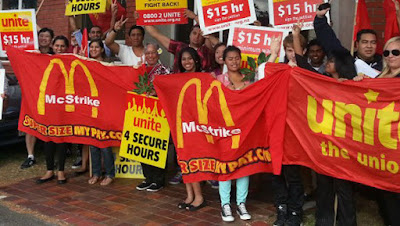 want to help you by bringing you this? 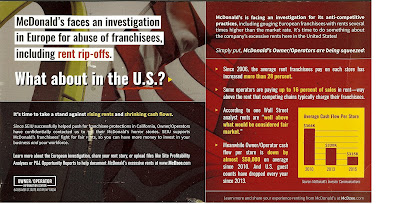 Although I totally agree that McD is soaking operators on rent, the SEIU "Fight for 15" push would put me OUT OF BUSINESS.

We are told that this will be a long process but in the end MCD should prevail. They have got to get the issue out of politics (NLRB) and into court. Regardless, I don't think that $15.00 per hour will become reality but it won't stay the same either. Operators will take the brunt of any increase in labor costs. Plus, the joint employer issue would require and allow MCD to negotiate wage rates for all stores with the union. However, it may also expose MCD abuse of the operators, as well. I'm told that stores being sold by the company they are increasing rents to sixteen per cent (16%). I don't know that is true. MCD could loose at lot if internal abuse of operators is exposed in this process. My guess is that there are many operators that would willingly participate to hurt MCD given the chance.

It's just semantics but "abuse" is not a word that fits in a franchising discussion. If McDonald's tries to get a high rent number when selling a McOpCo that's just plain old greed.
The Operator doesn't have to buy the store, or take a new store with unreasonable terms (as often happens).

I don't think we should mix in terms that apply to employee/employer relationships such as "abuse" in a franchising discussion.

McDonald's has a right to be greedy and try to get as much as possible for a product they are selling and McDonald's Operators have a perfect right to say NO and walk away.

The courts today ARE in politics and are stuffed with many left of center jurists appointed by the current liberal administration. With the death of the very conservative Scalia, the Supreme Court will necessarily move leftward in it's decisions in the future regardless of which party wins in November. Court decisions are becoming more modern and progressive.

"Abuse" in this case, I agree is a bit strong. However, within franchising there is clear "abuse" on many levels. The problem is clearly in the regions. Regional managers and QSCVP's in many cases develop "personal Agenda's" that have little to do with their executive responsibilities. The abuse may have little or nothing to do with awarding a new store. You are correct, if the business facts are unacceptable the operator is under no obligation to accept an offer. I have personally witnessed, as have others, long term successful operators targeted with impact. Personal agenda's by regional executives that amount to abuse is a very real fact of life. Many have a lot of power with little over site from Oak Brook. It is a growing issue.

I should revise and expand my comments. You are absolutely right, abuse is endemic in the franchise business. My workday is filled with abuse stores.

But, the abuse of franchisees rarely takes the form of documented rents, royalties, franchisee agreements, or franchise disclosures. Abuse cannot be prevented through state or federal legislation that depends on litigation for enforcement. As others have written, the abuse takes place off the record and behind closed doors.

It's easy to make recommendations but there are only two steps to addressing abuse in a franchise system: A) Franchisees standing up for themselves and not taking the abuse.
B) Franchisees being mutually transparent about what's going on behind closed doors and working together against corporate abusers.

One can indeed argue that an operator can dpsay "no" to a new unit with very high rent/fees/terms, but the offer is often coupled with, "if you don't want this new unit a mile away from your 3 existing McDonalds, that's fine. We'll just lease it to the franchisee from the next town over."

You can SAY it's not abuse. Maybe extortion is the better term. There is often more to the story that never gets put into writing. No evidence.

It's funny that SEIU is trying to take credit for the new California franchise law. SEIU wanted a trial lawter's dream bill that would have drowned franchisor sin litigation and triple damages and eventually drowned franchisees.

As an observer and participant in the MCD system for many years I have watched the creeping power and influence of the regions and regional staff's. GM's and VP's want more and more power and develop personal agenda's as to how corporate policy should be implemented and they use this power and lack of Oak Brook over site as a weapon against anyone, espically operators, who question their poor business practices. Although, this is not entirely unusual in large organizations. The difference in McDonalds is that Oak Brook has lost a lot of competencies themselves and are content to let the regions operate unchecked. The result is that everyone on both sides are just looking out for themselves rather than the brand. On top of all of this layer MCD's apparent desire to become an agent of social change rather than or in concert with trying to run effective local businesses and you hand a lot of power to regional staff to make judgments that they are not qualified to make. Making good decisions about "FOOD" and "good business" is no longer the number one priority. Regional staff's are "abusive" there is no question about that and anyone who doesn't recognize it for what it is doesn't know modern day McDonalds. It is not about the customer any longer.

This was made clear to me last weekend. I was in Houston for my grandson's BD. I went to pick up food from Chik Filet. It reminded me so much of what MCD once was. There were two BD parties in the lobby. lobby lady cleaning tables, lines five deep at each window, DT wrapped around the building, grill area snapping,happy customers, maintance men emptying trash cans, managers making skims. How did we lose our Mo Jo? We didn't we just gave it away. Leadership from the top is gone.

That's because Chick-fil-A is a family owned business, less interested in Wall Street and stockholder returns than customers, franchisee success and store viability. Much different corporate culture. The death of Ray, Fred and Jerry Newman changed all that.

Got to give SEIU credit they will try anything to move their agenda ahead. Any franchisee that would work with, reveal anything about their business or how their relationship works or is with the franchisor needs their head examined. I could be one of the first to tell you I have had my run ins and legal battles with the franchisor but I would never seek the help, support or reveal anything about the brand, my business or my relationship with my franchisor to the SEIU; they are the devil to our business, the franchise model and any business in America they have one agenda and you the business owner do not fit into that model.

Unfortunately, SEIU doesn't need to know anything from you about your business or the relationship with your franchise. They really don't care, SEIU wants penalizing wages and work rules regardless of what it does to your business, and they own the spineless legislator puppets who will eagerly do their bidding for cash contributions. The war is already over.

Besides,mthough it is irrelevant, they have failed and/or abused franchisees with nothing left to lose flocking to SEIU so that they can hurt the franchiser that they believed wronged them. Those people are telling them every horror story about franchising around. SEIU has what it needs, and more, to suffocate franchising to death. Scalia's passing just makes it happen faster.

If you are smart, you will plan on a post franchise ownership future.

The California $15 minimum wage deal made by SEIU with its bought and paid for legislators and Gov Moonbeam, without a single small business owner's voice in the conversation, unfortunately proves this viewpoint that franchise ownership is doomed is the correct view.

As you may have heard, the SEIU has been bombarding franchisees with flyers that
disparage their franchising system and encourage them to join the SEIU in their attack
against McDonald's. This franchisee-focused campaign, which started last year, has
many different names including "We are Main Street" and "Restore the Golden Arches."
Its aim is to convince franchisees to contact the Federal Trade Commission ("FTC") and
request that they investigate the franch ising industry. They have set up an
"Owner/Operator Information Center" at http ://mcdzee.com/ where franchisees are
encouraged to send them messages and sign a petition for the FTC. The SEIU's brazen
behavior is not surprising. If they succeed, every QSR in America will be hurt.
This recent stunt is particularly troubling because the SEIU has somehow gathered
franchisees' personal contact information and is exploiting it in a relentless email and direct mail campaign. They are sending emails to Owner/Operators directly to their
business email addresses, sending flyers to stores and to Owner/Operators' personal
home addresses, and even contacted an Owner/Operator through social media.
Don't fall for their hype. Our advice is to recognize that this effort is afoot. Many
Owner/Operators understand how dangerous the SEIU is and how far they will go in their
attempt to destroy QSRs and your franchising system. Since 2012, they have held
numerous strikes across the country, held countless press conferences disparaging
QSRs, and mounted wars in the press and in social media to turn public opinion against
QSRs. They have filed or helped file hundreds of Unfair Labor Practice Charges, OSHA
complaints, class-action lawsuits, and started investigations involving immigration and workers' compensation. They have enlisted local, state, and federal government officials and bodies to support their causes and are using the upcoming presidential campaigns for their own purposes. The SEIU has unleashed the full power of its multi-million dollar organization to attack QSRs weaken them financially and emotionally.
As you talk to your employees and managers about unions, especially in light of the April 14 Global day of Action, you should tell them what the union is doing: 1) using your personal information to bombard you with propaganda, 2) encouraging you to report your own franchisor to the federal government so you can destroy the business that supports everyone in your store, and 3) deceiving you into thinking they support you when they are actually trying to destroy your business and franchising system.
THE FACT IS ... THE SEIU IS NO FRIEND TO ANYONE IN THE QSR BUSINESS. This
latest campaign is no different. So if you are invited to protest against your franchising system, make sure you know who is behind it and if they truly have your best interests at heart.

SEIU gets a lot of FORMER franchisees who feel like they were burned by their franchisers to cooperate with them.they have nothing left to lose, and do not care if they take down successful franchisees, as long as they can cause pain to franchisers. It's a sorry state of affairs. These people should know that whatever pain they manage to visit on franchisors ALWYS gets transferred onto lithe backs of franchisees. Always. It is indeed in the franchise agreement.

I see a lot of comments about SEIU, but what about the content of the postcard? Paying rent at levels significantly above the local market rate (and what other QSR operators pay) may not be "abuse" but a lot of owner-operators are forced to agree to rent increases they can barely afford. That is deeply unfair to vulnerable operators.