Do You Know the Way to McCafe?

When I heard about Operator "Leadership" discussing the support of a new coffee initiative
I thought it was a joke or that I was being misinformed.

Then, Don Thompson mentioned coffee in his remarks on last week's analyst conference
call. Then, this week it was announced that a McCafe line would be tested in supermarkets.

It's doubtful we're only talking about drip coffee here and likely much of this is about espresso based drinks.

McDonald's Operators are busy and the years go by quickly so we'll review the damage done
by the disastrous launch of espresso drinks in 2009. The year was going along pretty well until McDonald's Operators began spending millions advertising espresso drinks - America yawned. This took advertising support away from the core menu and other new product introductions. Sales suffered and did not rebound until the introduction of iced drinks in the spring of 2010.

Please refer to the chart at the bottom of this post.

If this is another effort against espresso drinks it's coming at an awkward time as the overall sales improvements from 2003 to 2012 masked the failure of espresso drinks. There is no such momentum currently in the USA. This is a dangerous time to waste more advertising and system resources on a failed product line.

Yes, McDonald's management will blather about "brand extension" benefiting the Operators
but that never seems to work out the way it's promised.

If this is about spending more money on espresso then it is a continuation of Oak Brook's
obsession with Starbucks and their efforts to be more than "Hamburger Guys".

If OPNAD votes to spend more on espresso then it's time to consider shutting down this
voluntary ad fund. 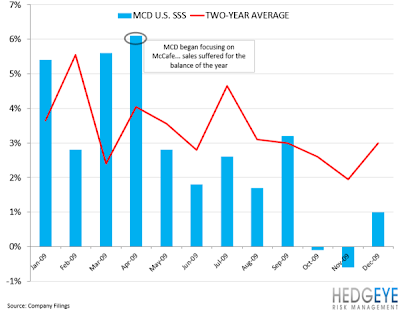 This McCafe/supermarket program has an echo of Redbox. I'm sure much of the corporate logic will be the same.