While changes at Subway will have little impact on McDonald's something more important might be happening at Chick-fil-A.

It doesn't get talked about enough, but one reason Chick-fil-A has huge volumes is that they have the "operator" on-premises with only one store. That might be changing.

For years the franchising section of their website was very straightforward, "We are not interested in candidates seeking multiple locations" - or words to that effect.

In other words, one operator - one store - that's it. It was pretty blunt.

Now I find the website has been updated and as far as I can tell that language is gone.

This might be an accidental omission. Or they don't know how to say it more gracefully. But it might mean they are going to supercharge their growth by allowing the franchisees to open multiple locations.  They must have many operators with decades of experience who could run a second or third location.

The guy who runs my favorite Chick-fil-A is a A+ operator and has his extended family involved. I could see him running multiple locations and doing a fine job.

They could accelerate their growth without help from whiney shareholders. And if they wanted to preserve capex the line of landlords eager to do build-to-suits would stretch from Los Angeles to Atlanta.

Something to watch - It's a good thing the NOA pushed for a focus on chicken, very prescient. 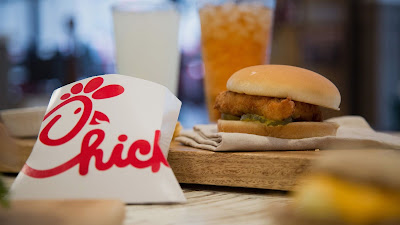