Will restaurant chains lead the way in Electric Vehicle charging? 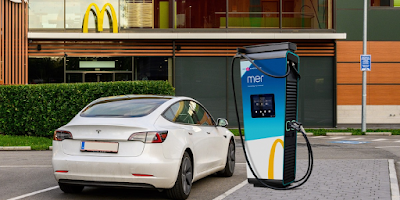 We have enough natural gas to provide electricity for every business and household for the next 535 years and enough coal to provide electricity for about 500 years.
So, don’t you think that in 530 years we will have developed alternative fuel sources?
Why then did Joe Biden sacrifice America’s energy independence, cease exploration for oil and gas, abandon pipeline development and drive up prices of gasoline, heating oil, and jet fuel and make us once again dependent on foreign oil?

Someone needs to educate me as to how we are going to produce all the batteries needed to facilitate a transition away from fossil fuels to battery-driven vehicles when the basic ingredients for batteries are all found in rare minerals such as lithium, cobalt, and zinc and others, all of which must be mined in countries not exactly friendly to us.

When will construction start to build the 500,000 battery charging stations Joe Biden told us about? Where will they be situated? Won’t they be powered by burning fossil fuels?

If there was a barnyard election, the cows, pigs and chickens would always vote for the person that feeds them and gives them treats, even though that same person is going to slaughter them someday.
That same philosophy is the very definition of socialism.


If you do not take an interest in the affairs of your government, then you are doomed to live under the rule of fools.
Plato

I tried to put a couple of these silly things on my lot thinking they would make my place a must-stop for those who choose to drive an office cubicle that offsets the inconvenience of having to recharge with big screen that plans routes according to charging stations. Figured first to market creates habits/routines and surely they’d offset themselves with income derived from charging.

Economics aside I was QUICKLY informed that I was not allowed to do this. Period. This is something that someone is actively working on at “MHQ”. (Makes me sick to my stomach to utter that word because it brings up everything that is wrong today). I wasn’t necessarily interested in making money on charging, I was interested in those who drive these cars buying lunch.

In years past one would assume that McD’s would want to partner with O/O’s and come up with some sort of revenue split, I’ve recently been told partnering on anything is over. I don’t necessarily believe that but I don’t doubt it either, we will see.

Speaking of no partnering, let’s look at automated order taking. I wonder how much McDonald’s will be paid on that $55,000 up front and roughly $30,000/yr perpetual fees? Our service fees are now simply income that must have a ROI for them so there’s no way that they’re simply investing in innovation to improve our operations or income as designed. Since we’re dropping “rewrite” why not just rename “service fees” what they are, royalty fees? GONE are the days in which they do their best to improve our bottom line, after all we are simply “glorified Uber drivers” and clearly replaceable with just about anyone off of the street, preferably from a “traditionally underserved” group. Can’t wait to see the influx of broke “entrepreneurs” who pay McDonald’s 15% interest on the loans to get them into business on top of the newly increased rent that appears to be happening all over the place.

It just sucks. They are supposed to work diligently to improve our operation, capacity and bottom line because they ultimately benefit from rent/service fees but that clearly isn’t enough for this bunch. What happened to the $1m/yr average store cash flow goal?

The math is just too juicy- 15,000 stores in the US alone would generate a half billion dollars in annual fees and the beauty of technology is once the heavy lifting is done there is very little relative ongoing cost. I cannot imagine this bunch not insisting on a significant cut of the revenue, gone are the days when they would diligently work to get our costs down, gone are the days when the operator wins, everyone wins, it’s every person for themselves.

But just wait, they’ll sell them on some goofy spreadsheet that shows a barely legible ROI that is eeked out about the time they require replacement or something. I cannot remember ONE innovation in recent history that has actually provided a measurable return for us. Heck- these half million dollar lobby remodels aren’t returning one dime yet they keep requiring us to improve their real estate.

So chargers are prohibited and the only thing I can come up with is that they’re just going to fly solo on them when they figure out how to make them make a bunch of money. I’m pretty remote so I thought about just working out a deal and installing them myself, they wouldn’t see them for years if ever but decided it’s probably best to let that one go.

I can’t wait to see the business case on some of this stuff. It’s totally predictable and never ever works in our favor.