Will "The Founder" Flounder? 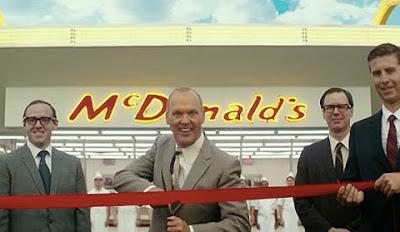 The pre-release publicity for the movie "The Founder" is becoming pretty loud. Some McDonald's folks are looking forward to the movie, others are apprehensive. In my
humble opinion - it's not going to be a big deal.

It appears the relationship between Ray Kroc and the McDonald brothers has been
dramatized beyond reality as evidenced by the poster that shows the arches, Michael
Keaton's profile, and the phrase "He took someone else's idea and America ate it up".
So much hype!

Maybe I'm a poor judge since these events predate my time at McDonald's but I've
heard the stories, read the books, and knew many of the players. It just wasn't that
exciting. Why would the (ever shrinking) movie going public be interested in 60 year
old business intrigue?

I'm a loyal Hewlett-Packard tech consumer. As national brands H-P and McDonald's
are about the same age. Do I care about any conflicts or traumas Bill Hewlett and Dave Packard went through in the early days of the company? Not a byte. Just give me good equipment at a fair price - same with my burgers.

Based on what we know thus far it appears that fans of McDonald's expecting a fair and accurate telling of McDonald's history will leave the theater disappointed. Or angry.

Me? I'll wait. Since The Founder will do poorly at the box office it won't take long for it
to be available on Netflix.
.
Posted by Richard Adams at 4/25/2016

My expectation is that McDonald's as a corporation and Ray as a passionate businessman will be demonized, Ray's passion for operations will at best be a sideshow and O/O's will be either portrayed either as neutral or perhaps victims of corporate greed.

Not doubt. Hollywood never misses a chance to demonize business leaders. Based on the trailer it's the McDonald brothers who will be portrayed as victims.

McDonald's stakeholders should wish for more movies like that.

The corporate culture was very different in Ray's day. They actually wanted very successful franchisees, and did what they could to make that happen. But I doubt that will be a theme in the movie.

I'm being bombarded by these guys: http://mcdzee.com

Their crap even showed up on my Facebook feed somehow. It's creepy.

I was told that the movie release was moved up from November to August in an effort to influence the upcoming elections. Given the theme of corporate greed and the political leanings of Hollywood, I'm curious to see if they were able to somehow gain an audience with the writers/producers/directors?

All you need to know is that this movie was produced and distributed by the uber-liberal, Hillary supporting Weinstein Company.